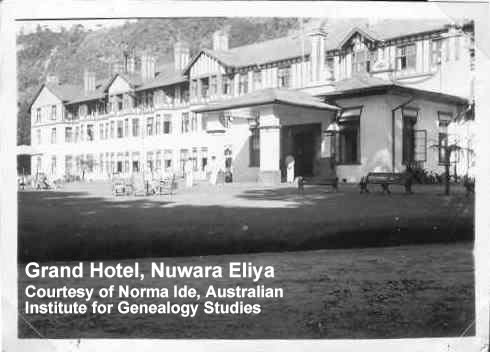 Left Galle Face at 8am and proceeded by car up country. Passed Penrith, Oaklands and Broadlands tea Estates. Called and saw Mr. Scott, Pannawattee Estate, and witnessed the processes of Tea and Rubber manufacture. Our next call was at Panmure. Had lunch with the Manager, Mr Murray Clark, and learned his views about tea. Panmure though medium grown is averaging more in price than high grown Teas but is not now sold on the London Market – two well-known firms take the whole output. Ultimately came to K.A.W. Carolina Group; this is in a wonderful position. Something had gone wrong with our reservations at Adams Peak Hotel and our friend, Mr. Gibbon, the Manager of the Garden, put us up for the night. Here is a modern factory on the hill with a man as manager who takes his job seriously; an experienced planter, and anxious to learn the retailers point of view. We saw everything – had the plucking, withering, rolling, fermenting, firing, grading, packing and testing for moisture content demonstrated. We taste the teas at each factory called at but they taste new and greenish. It is 3 months before we get them in England and in that time they become matured. The Planters we have met appear to be the most gentlemanly type of man – educated, hospitable, good living and sober and a really fine type. Our courier, Mr. Bell, is a good man in many ways. He is a Tea Planter just returned from South Africa and was asked by Cooks to undertake the job of showing us round. A wonderful education for Mac, not to mention myself, although I am too old to benefit much by my present experience. We left Colombo on Tuesday and have had two strenuous days motoring in an open car, climbing all the way. Now six thousand feet above sea level and have travelled over 100 miles and are now in a cooler climate. We have passed scores of Tea Estates and eighty per cent of the gardens are very familiar names to us as we have bought their teas for the past twenty years. Ceylon is a most wonderful and beautiful country. The motor drive for the past two years has been hair-raising – a narrow road round the mountain side and hundreds of hair-pin bends with a big and long car into the bargain. Good job we have a good driver, but he is tired tonight. We are now at the Grand Hotel at Nuwara Eliya –  a very nice place.