X
We use cookies to give you a delightful shopping experience. We'll assume you're ok with this, but if not, you can learn more about it here.
More Info
Accept Cookies
Menu
New products

These pearls are made using small leaves from white tea bushes in Fuding, a mountainous region with a good deal of seacoast on Fujian’s border with Zhejiang province. The tightly rolled balls are repeatedly scented with fresh jasmine blossoms which creates the appealing fragrance. Pale in colour with a delicate flavour and pronounced jasmine aroma. The leaves will unfurl when they are infused and can be re-infused many times.  The attractive nature of this tea is best appreciated in a tall glass or shallow white drinking bowl that shows off the leaves at their best.

The coastal area means that the mountains are often covered in a dense sea fog. Legend tells of a mighty dragon with eyes like pearls and a sweet scent to fool its prey. As the sea fog climbed the hillsides, so would the dragon, rising from the waters and hiding in the brume. The villagers would try repeatedly to kill the dragon, but it would always rise again, like a phoenix from the ashes.

After many years, the villagers realised that every time the dragon came ashore, the mountains became rich with minerals from the sea water, allowing them to grow the finest tea bushes.   And so they would leave animal meat on the areas of the hillside they wanted to grow, tempting the dragon to those fields. The region prospered and the people thanked the gods for the dragon they once feared. 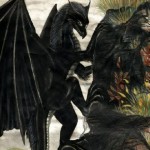 The dragon climbs the hillside. 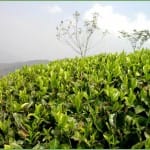