Our Japanese Green Sencha is a wonderful example of the Japanese style green tea which is made without grinding the tea leaves.  The word ‘sencha’ or ‘sincha’ means ‘simmered’ referring to the way this green tea is prepared. We select the newest teas early in the season which gives our Sincha its appealing taste; fresh and grassy.

A long, long time ago there lived an old man and his wife. They had no children and lived a poor and lonely life in a remote corner of Japan. They longed for the company of others, and to be part of a community but their health was frail and they could not travel. So the old woman gathered all her most precious possessions and offered them to the gods in a fire. She begged for their help in setting her and her husband free from their secluded life.

One day, as the old woman was cleaning her cooking utensils in the river, she came upon a leaf floating downstream. It was unlike any leaf she had ever seen and so she tried to scoop it out of the water as if floated past. It slipped right through her fingers, so she began following it along the water’s edge. Her husband saw her and came from the house. “Where are you going? Come back!” he called. “You will wear yourself out and I do not have the strength to carry you home!” But the old lady carried on, and so he followed her.

The couple were beginning to tire when they came across a donkey grazing by the side of the river. They climbed on the donkey and continued to follow the leaf. Soon after, they became hungry. The smell of cooked chicken wafted through the air and when they passed through some trees to the clearing on the other side, they found two young orphans cooking on an open fire. The orphans invited them to join them and they all got on so well that the children continued on with the old couple.

The leaf seemed to pause every time the couple did and was never out of sight, always leading them on. Eventually the party came upon an abandoned house. Inside they found gold and silver, warm blankets, dried hams and wine. They took what they could carry and rode on through the night. The old couple fell asleep, resting against each other on the donkey.

In the morning, they were awoken by the sound of laughter and merriment. They had arrived in a village, full of hustle and bustle. Children played, mothers were cleaning and chatting, men were working in the fields. Horses and chickens roamed and the smell of breakfast cooking made them hungry. The villagers came forward to welcome them and invited them to stay. They built a house for them and the orphans lived with the old couple happily.

The leaf that had led them washed up on the shore and they planted it behind their new house, where it grew into a tea bush. The tea tasted fresh and sweet and every time they had visitors the old couple served them this special drink.

Never again were they lonely, or poor, or unhappy. 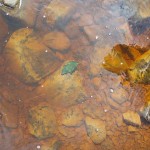 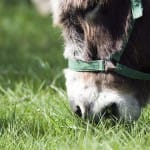 Donkey Grazing by the River