This Tie Guan Yin is a premium variety of Chinese Oolong tea which originated in the 19 century. Processed using traditional techniques in a small village high in the mountains of Anxi County, Fujian Province, the leaves are in tightly rolled balls which unfurl when the tea is infused. Distinct for its pale colour and orchid-like fragrance, this tea has a velvety mouth feel and a lingering aftertaste. Pour the first infusion quickly and then repeat up to eight times.

The story behind Tie Guanyan.

Why is this tea called Iron Goddess? Well, grab yourself a cup of afternoon tea or coffee, maybe a Triple Chocolate Cookie or two, and let us explain.

‘Tie Guan Yin’ literally translates to ‘Iron Guanyin’ and this tea is sometimes known as ‘Iron Goddess.’ So called because of an old legend.…

Deep in the heart of Anxi County there lived a poor tea farmer. Every day as he made his way to his fields, he passed an ancient rundown temple which held an iron statue of Guanyin, the Goddess of Mercy. Disheartened at its worsening state, the poor farmer who had no means to pay for proper repairs, instead swept the temple to keep it clean and brought incense from his home to offer up to the statue.

He did this for many months until one night Guanyin herself appeared to him in a dream. She spoke of a secret cave behind the temple where treasure awaited him and told him he should share it with those around him.

The farmer searched for the cave the next day and in it he found one single tea shoot which he planted and nurtured. The tea produced from this bush was the finest he had ever tasted and he gave cuttings to all his neighbours so everyone could enjoy his good fortune. He began to sell the tea and over time the whole region prospered and the rundown temple was repaired and restored to its former glory. It became a beacon for the region and the community. The once poor farmer took much joy in his daily trips to the fields, admiring the beautifully restored temple and wondrous statue. There had indeed been treasure in that single tea shoot. 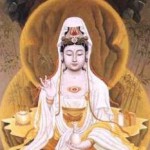 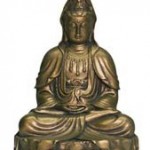