X
We use cookies to give you a delightful shopping experience. We'll assume you're ok with this, but if not, you can learn more about it here. click here
More Info
Accept Cookies
Menu
Lifestyle

Did we get you?

EXCITING NEW RANGE! 25% OFF TODAY ONLY.

We’ve had this under wraps for some time. In fact, it’s been 2 years in the making, but the time to unveil this very special range has finally arrived.

Back at the start of 2013, our CEO Simon Smith announced he was beginning some research and development into a range of products for left handed people. Simon is left handed himself and says that he has always found it that little bit harder to make the perfect cup of tea than his right handed counterparts. 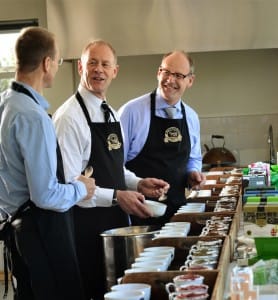 The Smith Brothers at work in the tasting room.

Production began 6 months ago and we now have a range very similar to some of our core tea making items, but      with left handed appeal.

When ships used to bring our tea to the UK they would moor on the left hand side of the harbour – or portside – and so the new range has been given the grand title of The Portside Collection.

Launching today, we have a very special offer of 25% off any of the items from the collection.

To view the full range and claim your discount click here.